We work directly with children, the important adults in their lives and the communities around them to ensure our programmes are relevant and have a lasting effect. All these efforts help to ensure that children in areas affected by armed conflict can build a better future - both for themselves and their communities.

War Child works to support the healthy psychosocial development of children living with the consequences of armed conflict. These consequences can take on many forms - including feelings of fear, anxiety, and depression, as well as exposure to physical and sexual exploitation. Yet - with the right support - most children will be able to cope with the adversities they experience. Our psychosocial support interventions are designed to enable children and young people to develop their resilience and innate strengths. Participants in our life-skills interventions and structured recreational activities develop increased self-confidence and trust in others.

For children experiencing enduring distress, we are currently testing a scalable model of intervention in Lebanon developed by the World Health Organization. A community-based detection tool - to enable the identification of children in need of specialised support - is also undergoing assessment.

After being defeated at Dien Bien Phu in and forced to withdraw from Vietnam after nearly a century of colonial rule, France quickly evacuated 25, Vietnamese children of French parentage and gave them citizenship. For Amerasians the journey to a new life would be much tougher. About of them left for the United States with Hanoi's approval in and , but Hanoi and Washington—which did not then have diplomatic relations—could not agree on what to do with the vast majority who remained in Vietnam.

Hanoi insisted they were American citizens who were not discriminated against and thus could not be classified as political refugees. Washington, like Hanoi, wanted to use the Amerasians as leverage for settling larger issues between the two countries.

Not until , in secret negotiations covering a range of disagreements, did Washington and Hanoi hold direct talks on Amerasians' future. But by then the lives of an American photographer, a New York congressman, a group of high-school students in Long Island and a year-old Amerasian boy named Le Van Minh had unexpectedly intertwined to change the course of history. It broke my heart. Minh's mother had thrown him out of the house at the age of 10, and at the end of each day his friend, Thi, would carry the stricken boy on his back to an alleyway where they slept.

On that day in , Minh looked up at Tiernan with a hint of a wistful smile and held out a flower he had fashioned from the aluminum wrapper in a pack of cigarettes. The photograph Tiernan snapped of him was printed in newspapers around the world. The next year, four students from Huntington High School in Long Island saw the picture and decided to do something. They collected 27, signatures on a petition to bring Minh to the United States for medical attention. They asked Tiernan and their congressman, Robert Mrazek, for help.

Handbook of Resilience in Children of War

Humanitarian considerations carried no weight. State Department and someone from Vietnam's delegation to the United Nations willing to make an exception? Mrazek began making phone calls and writing letters. Mrazek had found a senior Vietnamese official who thought that helping Minh might lead to improved relations with the United States, and the congressman had persuaded a majority of his colleagues in the House of Representatives to press for help with Minh's visa.

He could bring the boy home with him. Mrazek had hardly set his feet on Vietnamese soil before the kids were tagging along. They were Amerasians. Some called him "Daddy. Another 60 or 70 Amerasians were camped in the yard. The refrain Mrazek kept hearing was, "I want to go to the land of my father. There were lots of these kids, and they were painful reminders to the Vietnamese of the war and all it had cost them.

Let's bring them all back, at least the ones who want to come.


They took him to orthopedists and neurologists, but his muscles were so atrophied "there was almost nothing left in his legs," Nancy says. Minh wondered if his father was among the 58, names engraved on it. He was very resistant to school and had no desire to get up in the morning. He wanted dinner at midnight because that's when he'd eaten on the streets in Vietnam.

Minh, now 37 and a newspaper distributor, still talks regularly on the phone with the Kinneys.

He calls them Mom and Dad. Mrazek, meanwhile, turned his attention to gaining passage of the Amerasian Homecoming Act, which he had authored and sponsored. In the end, he sidestepped normal Congressional procedures and slipped his three-page immigration bill into a 1,page appropriations bill, which Congress quickly approved and President Ronald Reagan signed in December The new law called for bringing Amerasians to the United States as immigrants, not refugees, and granted entry to almost anyone who had the slightest touch of a Western appearance.

The Amerasians who had been so despised in Vietnam had a passport—their faces—to a new life, and because they could bring family members with them, they were showered with gifts, money and attention by Vietnamese seeking free passage to America. With the stroke of a pen, the children of dust had become the children of gold. It was like we were walking on clouds.

We were their meal ticket, and people offered a lot of money to Amerasians willing to claim them as mothers and grandparents and siblings. Counterfeit marriage licenses and birth certificates began appearing on the black market. Bribes for officials who would substitute photographs and otherwise alter documents for "families" applying to leave rippled through the Ministry of Foreign Affairs.

Once the "families" reached the United States and checked into one of 55 transit centers, from Utica, New York, to Orange County, California, the new immigrants would often abandon their Amerasian benefactors and head off on their own. It wasn't long before unofficial reports began to detail mental-health problems in the Amerasian community.

Many Amerasians did well in their new land, particularly those who had been raised by their Vietnamese mothers, those who had learned English and those who ended up with loving foster or adoptive parents in the United States. But in a survey of Vietnamese Amerasians nationwide, Bemak found that some 14 percent had attempted suicide; 76 percent wanted, at least occasionally, to return to Vietnam. Most were eager to find their fathers, but only 33 percent knew his name. In Vietnam, they weren't accepted as Vietnamese and in America they weren't considered Americans.

They searched for love but usually didn't find it. 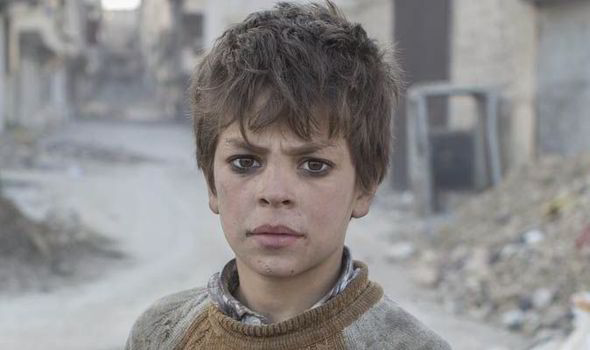 Of all the immigrants in the United States, the Amerasians, I think, are the group that's had the hardest time finding the American Dream. But Amerasians are also survivors, their character steeled by hard times, and not only have they toughed it out in Vietnam and the United States, they are slowly carving a cultural identity, based on the pride—not the humiliation—of being Amerasian.

The dark shadows of the past are receding, even in Vietnam, where discrimination against Amerasians has faded. They're learning how to use the American political system to their advantage and have lobbied Congress for passage of a bill that would grant citizenship to all Amerasians in the United States. And under the auspices of groups like the Amerasian Fellowship Association, they are holding regional "galas" around the country—sit-down dinners with music and speeches and hosts in tuxedos—that attract or "brothers and sisters" and celebrate the Amerasian community as a unique immigrant population.

His grandmother in Vung Tau took him in while his mother served a five-year sentence in a re-education camp for trying to flee Vietnam. He says his grandmother filled him with love and hired an "underground" teacher to tutor him in English.

At age 22, in , he came to the United States with a third-grade education and passed the GED to earn a high-school diploma. It was easy convincing the U.

He had a picture of his father, Sgt. James A. Miller II, exchanging wedding vows with Jimmy's mother, Kim, who was pregnant with him at the time. He carries the picture in his wallet to this day. Jimmy's father, James, retired from the U. Army in after a year career. In , he was sitting with his wife, Nancy, on a backyard swing at their North Carolina home, mourning the loss of his son from a previous marriage, James III, who had died of AIDS a few months earlier, when the telephone rang.